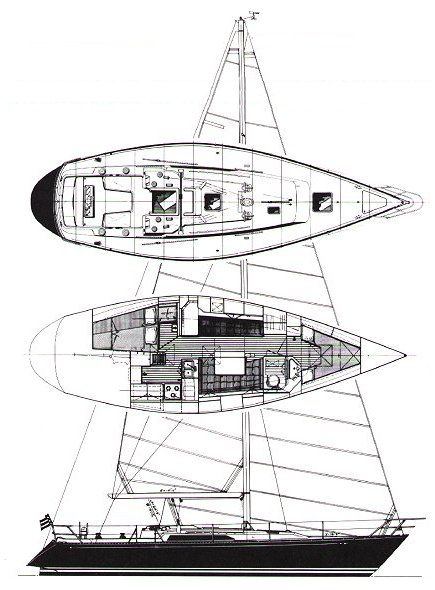 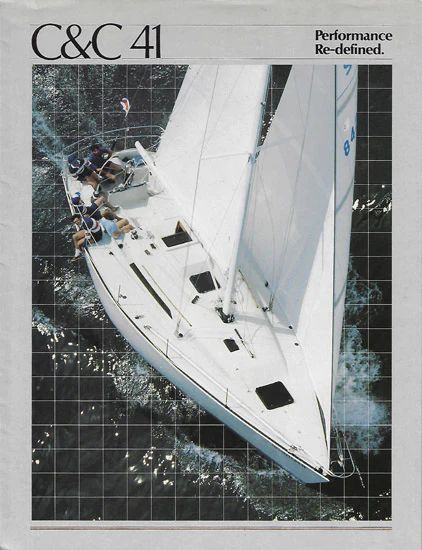 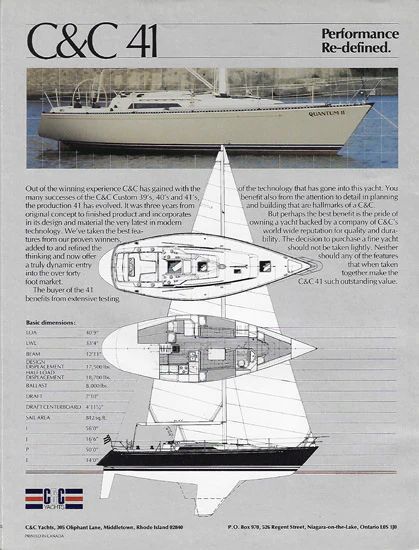 The C&C 41 evolved and a total of 127 were built, some with sumptuous accommodations while others continued the flat-out theme, notably Clockwork, a contender for the defence of Canada's Cup in 1984. C&C 41 (1981) This was a bread-and-butter boat for C&C during the early '80s. A semi-custom version, Silver Shadow III, was part of the all-C&C Canadian Admiral's Cup team in 1983. A handsome design with respectable speed on the race course.

Few yachts have created more controversy than Don Green's 1978 Canada's Cup winner. A radical, dinghy-like 41-footer designed only with winning the above trophy in mind, its extreme design and controversial features ruffled feathers around the world. The C&C design team exploited rule loopholes -- ruthlessly -- the galley, for example, had a sink, as the IOR prescribed, but it had no drain (to save weight), which the rulemakers didn't think to mention. Her deck hatches opened inward, raising heated debate about her seaworthiness. After winning the Cup, rulebooks were tightened to make sure nothing like her ever sailed again. Her complex rig hydraulics were banned, her gybing daggerboard deepsixed, and despite her having won the cup, no-one ever asked C&C to design a Canada's Cup boat again. All controversy aside, Evergreen was an astonishing technological tour de force. Fourteen years later, she'd still more sophisticated than any IOR design today.

The C&C 41 is a small recreational keelboat, built predominantly of fiberglass, with wood trim. It has a masthead sloop rig, a raked stem, a raised reverse transom, an internally-mounted spade-type rudder controlled by a wheel and a fixed fin keel or optionally keel and centreboard. The fixed keel version displaces 17,500 lb (7,938 kg) and carries 8,000 lb (3,629 kg) of lead ballast. The keel-equipped version of the boat has a draft of 7.80 ft (2.38 m), while the centreboard-equipped version has a draft of 8.00 ft (2.44 m) with the centreboard extended and 4.92 ft (1.50 m) with it retracted.