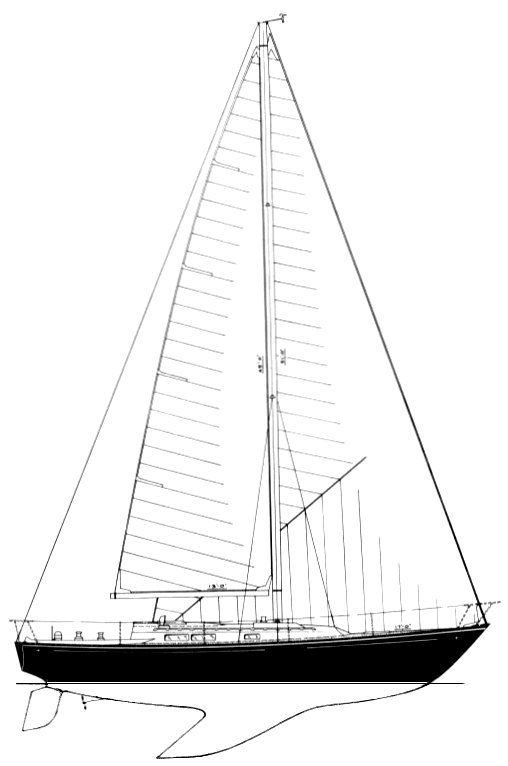 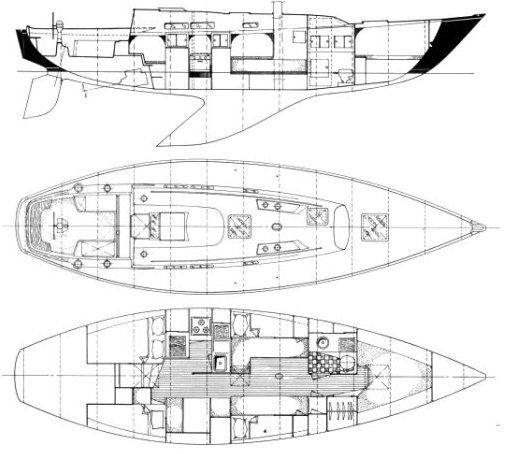 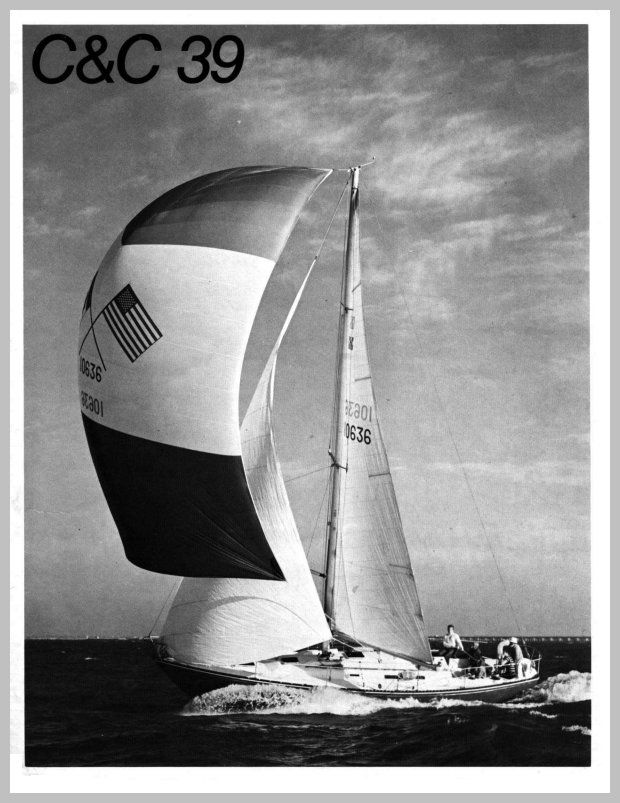 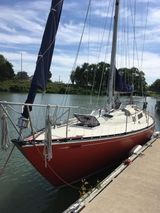 Now jump 10 years ahead. The CCA rule had been replaced by the controversial IOR rule in an attempt at getting one rule that worked internationally. To a racing sailor seasoned on the benign behaving Cal 40, the typical new IOR boat was a monster, tender and difficult to steer downwind in a blow. The C&C 39 was one of the first production boats designed to fit the IOR rule. For the same IOR rating as the Cal 40, the C&C carried a far larger rig and would demolish the Cal 40 in light to moderate winds. The two Cs were talented Canadian designers George Cuthbertson and George Cassian.

I fell in love with the C&C 39 immediately. This design remains today one of my all-time favorite production boat designs. To my eye there is not an ugly line on this entire design. I think it would be hard to find a more pleasing cabintrunk shape on any boat today. Of course one of the things that immediately jumps out at you with this design is the traditionally raked transom. This transom treatment may have been an effort to stretch the deck and cockpit layout of the boat while at the same time restricting the aft girth measurement so important in IOR. The more you pinched the bow and stern sections the more you moved your forward and aft girth locations together. The distance between fore and aft girths, LBG, was seen in this rule as an approximation of the boat's sailing length. This LBG was corrected by factors based upon buttock slope measurements in the stern to access the effect of the stern shape on sailing length. It sounds complicated and without diagrams it is. Just know that IOR encouraged pinched ends.

Looking at the plan view of the C&C 39 you can see that while the bow is quite full the stern has been pulled in and in profile you can see how the counter has been tucked up. This is a way of manipulating the aft girth measurements. The sheer is beautiful. The hull profile shows a gentle curve to the forefoot indicating deeply V-ed sections. These would change later under IOR to boxy, squared-off forward sections as designers began to use the "connect the dots" style of IOR design. But in the early IOR days we were still afraid to be too brutal with the shapes we had become accustomed to under the CCA. C&C loved that highly swept keel. I suppose it had good drag characteristics off the wind but upwind it really did the boat few favors other than improve stability. But to a young man's eye it looked great and it looked fast, kind of like a shark's fin. C&C also stuck with the "scimitar rudder" profile for a long series of designs. We now know that a much higher aspect ratio rudder, thinner and deeper, is far more effective. But it was 1974 and this funny rudder looked fast. The D/L of the 39 is 245 and the L/B is 3.54.

C&C 39s were very fast. In my area, John Newton's Pachena won just about everything until a next generation IOR boat, the Carter 39, came to town. The C&C 39 was very fast in light air, it was far faster upwind than the old CCA types and the large foretriangle meant the 39 could fly a huge spinnaker. My pal Brian sailed his 39 Biscuit Eater to the South Pacific on a two-year cruise, proving the boat was also an excellent offshore cruising boat.

You can easily see how IOR affected rig design. The sail area of the mainsail was seen as not as effective as the sail area of the headsails, so mainsails started to shrink to what we eventually called the "IOR ribbon main." Mast location moved aft and foretriangles became huge. Compare the overall geometry of this rig with that of the Cal 40. They are very different. The Cal 40's main and foretriangle were almost identical in area. The C&C foretriangle was almost 50-percent bigger than the area of the mainsail. The I dimension of the C&C is 5 feet taller than that of the Cal 40. This is obviously where some of the light-air performance came from. Downwind the mainsail was virtually useless and the typical IOR boat rolled from gunwhale to gunwhale trying to immerse hull form to find form stability while the driver did his best to steer the boat under the big oscillating spinnaker. Years later a bunch of upstart designers from New Zealand would show us a better way of dealing with IOR.

The interior of the C&C 39 was nicely laid out and far roomier than that of the Cal 40. The C&C 39 was truly a dual-purpose race/cruise type of boat. I particularly like the expanded galley and pilot berths of the 39.

I still stop and gaze in admiration when I see a C&C 39 hauled out. The sweep of the keel fin, the silly but sexy rudder shape and that glorious bold C&C sheer spring make a great picture. In the water I am struck by the perfection of proportion shown in the cabintrunk. Note the subtle touch of superimposing a "bubble" on top of the house top camber to increase the headroom aft without introducing any eye spinach. In performance the 39 would be quickly eclipsed by more hard-line design approaches to IOR but in aesthetics, in my humble opinion, I can think of few production boats that are more handsome.