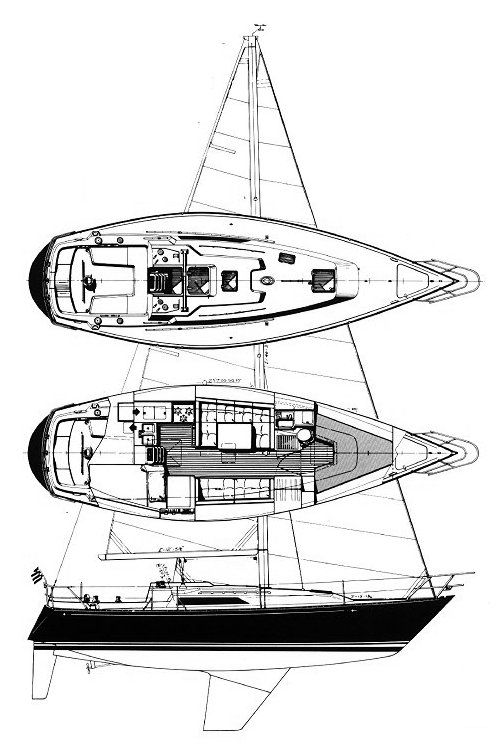 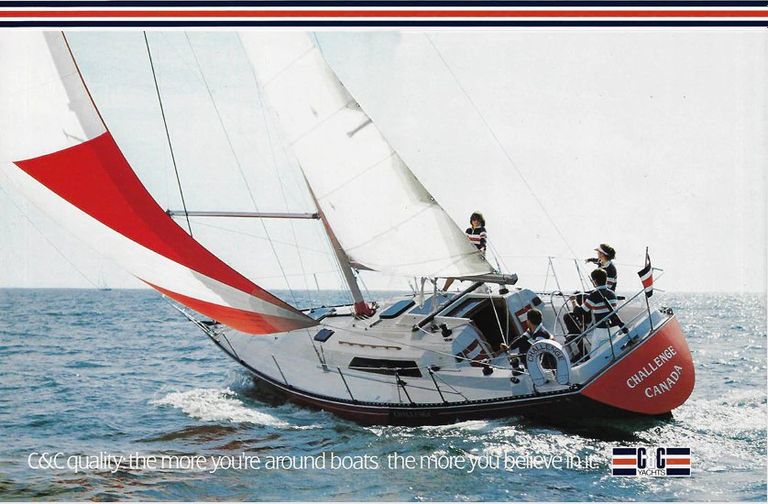 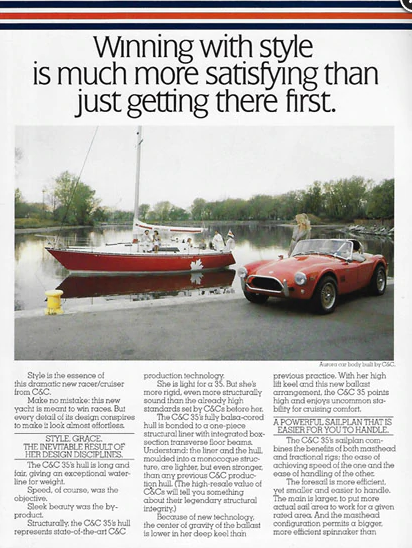 To talk intelligently about the 35, I think, suggests that a bit of design history is important . . . . .This will be long . . . . so you might want to read it in installments. When Big George handed me the Chief Designer role in 1973, I was very surprised. I had expected him to fill the role for a number of years, so I concentrated my efforts on other aspects of yacht design . . . rig design, deck layouts and laterally on structures as well . . . . My first couple of hull designs were essentially re-works of existing hulls with minor changes . . . . The first design that I undertook from a ‘clean sheet’ was the C&C 33 done in the spring of ’74 . .My ‘walking papers’ at that point were for a high performance design, fitting the three-quarter ton size, that would race well to re-establish our image on the race track . . . . This was a tough way to start my ‘real’ career and I researched as much as I could and with trepid heart introduced a somewhat new (but not revolutionary) design and we tried to make it look the part as well. The hull still used Big George’s ‘wedge’ idea, and I believed this would yield good results . . . My first sail on the boat was terrifying with almost no interior in it, underweight, it rounded up while reaching at an alarming rate . . . . I was pretty discouraged. Once real boats came out, however with more weight, the steering calmed down, and the performance was there . . . . what a relief . . . An early boat was shipped to Europe (to be used by Baltic Yachts for their production) and it was entered in the Three-Quarter Ton Cup that was in Norway that year . . . In the first two races they placed well and in the third race bested the fleet a pretty amazing thing considering it was a production boat with interior - up against race boats . . . . Wow . . .and then in the next race they broke their mast - not so good but . . . . but . . . . the boat was good . . . . . The 33 enjoyed a pretty good run I think primarily on performance and C&C’s name stayed up there . . .

Several years later in ’77 the ‘walking papers’ were to do the 34 the same as the 33 but with more living space . . . . . people were tired of bumping their heads as they walked forward in the 33 . . . . The 34 was very similar to the 33 below the water but had higher freeboard and more beam as well. The interior was a big improvement on the 33, as a result, and the boat was well received . . . . I applied for my ‘Once-in-a-lifetime’ boat purchase from the company and subsequently built a 34 of my own using the 34 tooling . . . . In reality I didn’t build it myself just hired the normal guys to work on weekends. On Friday afternoon, they would drive my project into the shop, and on Sunday night drive it out again . . I had the interior left un-oiled, and then varnished all the wood myself . . . . a great boat . . . . but like anything . . . there was this little thing and that little thing . .etc. It became time for the next boat, and here I was living with its’ predecessor . . . . so I was able to be up-close-and-personal with all the details like never before . . . .

The result was the C&C 35 Mk III, which I consider a favorite because of this closeness. Every aspect of the boat was new, in my mind, and the hull shape now was the ‘truncated diamond’ type shape as opposed to the older ‘wedge’ type . . . This gave both long sailing length and balanced steering when heeled . . . . This was a wonderful development eliminates broaching right ? . . . . not quite . . . . what it means is that instead of broaching on a reach, at six knots . . like we were all used to . . . . now you could go seven or eight knots on a reach . . . but then you broached faster . . . . . you just can’t win . . . . . Prior to the 35 we had done the 40 (the first of the ‘truncated diamonds’) which was our largest real production boats to date . . . . That boat had several stainless ‘T’ fittings around the deck to hold it down to the bulkheads . . . . Unfortunately this method of boat building lent itself to leaks, and we spent many customer service dollars fixing these and adding more ‘T’ fittings to boats in production . . . . We finally convinced the company that we had to actually connect the bulkheads to the deck (virtually all boats prior had the deck simply sitting on top of the bulkheads, not joined). This was no easy project, since it required laminating the bulkhead-to-deck joint inside after deck fitment . . . . Since we glued the deck liner to the deck before installing it, there was this nasty lamination around the bulkheads that needed to be covered as additional fitted small liner parts . . . . This process was a big cost-increaser. . . . but we felt it was needed . . . I remember Jack Synes saying that it was a lot better to spend the money to build the boats better at the get-go, rather than afterwards in warranty costs . . . . Well . . . . . the very FIRST time we sailed with a sailmaker on board which was probably the second or third sail there was BIG reaction ! The headstay doesn’t sag . . . . WOW . . . . The whole process of bulkhead/deck joining had stiffened up the structure dramatically, and now the big genoa could be carried much more effectively . . . . Unfortunately, there is a give and go in many things in life, and stiffening up the boat also makes it somewhat more brittle . . . . the 35 does itself much more damage when it hits a rock at six knots than prior boats which were far more flexible . . . . but C&C’s place was higher performance than the next guy, so we continued in this vein, where possible to engineer performance into our projects . .

The interior development incorporated an inch here and an inch there to expand on the 34 living spaces, and the balance between interior volume/comfort and exterior size and aesthetics came off well, in my opinion . . .but I am a bit biased . . . . I’ve seen the 35 racing and it’s results seem to be spotty . . . A couple of years ago I sailed the three day Buzzards Bay Regatta on a very well prepared C&C 40 (Zoomer) and on three different days saw the 35, which started five minutes behind us, right with us at the weather mark, ahead in one case . . . . so I know there is upwind speed there . . . . but on other occasions the 35 is at the other end of the spectrum . . . . I’m not absolutely sure why I suspect mostly that it is a bit tender for its’ rig size, but haven’t been able to really test that out. . . . If you own one, I think you should try hard to keep the boat on its’ feet - slightly wider sheeting angle, draft forward in genoas, flat exit on the main . . . . . obviously the boat takes a bit of familiarity to be the world-beater that it can be . . . . . I have watched longingly when 35’s have come up for sale, but haven’t taken the plunge . . . maybe one day . . . . . . .