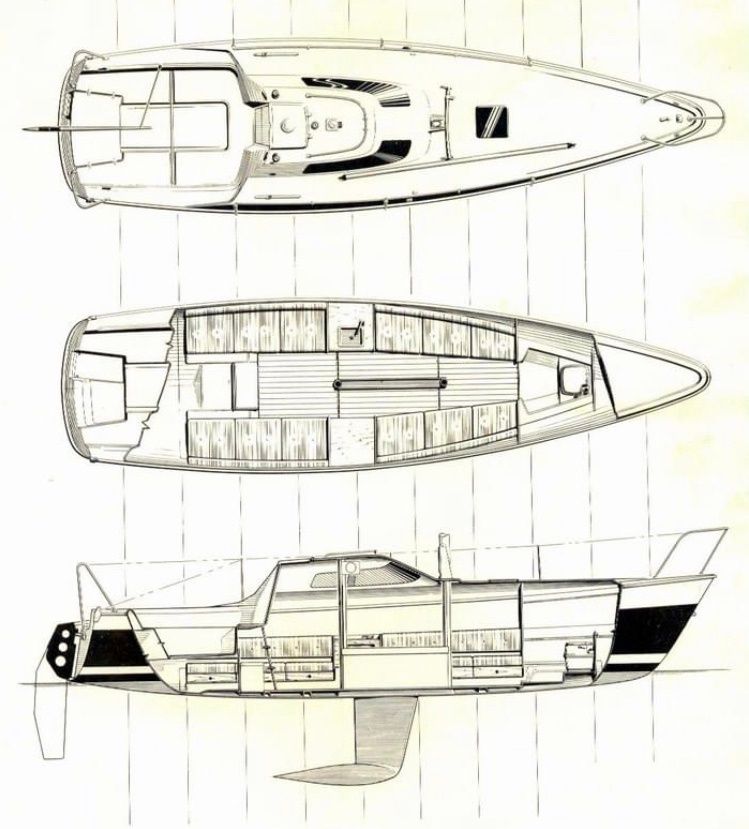 Oblio, Crunch, Far Away In Time

The Mega project should have/could have been more successful than it was . . . . . It had everything you could ask for in a trailerable boat that size . . . I remember doing the lines drawing – 30 feet long – as much space as possible, but keep it to 8 foot beam – but I was aware that we would need standing headroom, so high freeboard as well. I remember how stable the boat is when you step on board and thought that would appeal to a lot of people who were not very experienced . . . . I feel that that we had a big dealer network that were used to selling more-or-less ocean going sailboats, and they were mostly located near or on the ocean. Come along with a trailerable boat for smaller lakes, and all those oceanside dealers had trouble finding customers . . . . If we had sought out and signed up a bunch of small lakes type dealers, life could have been much different . . . . Incidentally, the C&C 30 was the first lines drawing that I ever did . . . so I remember it well – but I was Not the designer. Big George gave me the shapes and I just put it down on paper (film actually) . . . .

These events took place over 40 years ago, so memories do start to fade. However, my recollection is that the concept of producing a mass marketed 30' trailerable one-design sailboat was brought to C&C by Peter Barratt of North Sails. Peter's interest, of course, was to have North provide all the sails for this hopefully high volume one-design that C&C would build and market through its large dealer network world wide. The Mega was to be built in all three C&C plants - Niagara-on-the-Lake, ON, Middletown, RI, and in Keil, Germany. This was the same year that the J24 was gaining traction, as well as other one-design keelboats. Peter and George oversaw the design concept which was done by the C&C Design Group, headed by Rob Ball. It was project 77-8. I was the Project Manager for the Mega. The name "Mega" by the way was coined by Rod Gerrard, if I remember correctly. . All projects in the C&C Design offices were assigned a Project Manager whose duties were to make sure all the required drawings were produced on schedule, and be the "go to" person for the production and tooling divisions of C&C. However, since all the Senior Designers in the office were managers of at least one project, most drawings on any particular project often ended up being done by the Project Manager. However, in addition to myself, I see Rob Ball, Steve Killing, George Cassian, Bill Goman, Clive Hussy, and George Hazen's initials on the Mega drawings that I rescued from the mezzanine in the Tartan Marine shop several years ago, and subsequently donated to the Marine Museum of the Great Lakes at Kingston.

Strangely, there was no Hull Lines drawing included with those drawings, so I expect that drawing had been donated to the Museum in a previous cache of drawings delivered by Tim Jackett of Tartan. However, there is no doubt in my mind that the Lines Plan was done by the C&C Design Group, most probably by Rob Ball.

The prototype was built in aluminium by Martin and Danny Klacko. The Mega was originally designed as primarily a flush deck boat, but George insisted that C&C would not build a 30 footer that didn't have standing headroom, so that small house was raised in height to achieve 6' headroom. There are a number of reasons that the Mega did not live up to Peter and George's expectations, but we won't go into that now. Hank Evans, by the way, was the Marketing Manager of the Mega.

MEGA (1977) Ford had its Edsel, C&C had its Mega. At the height of its success as a builder and designer of first-class yachts, C&C produced this turkey. The concept of a one-design 30-footer at the price of a 25-footer was admirable, but too many cooks - or concepts spoiled the broth. By the time C&C had finished making the Mega trailerable (with 8foot beam and retractible fin keel) and giving it standing headroom, a self-tacking jib on a seven-eights rig and a transom-mounted rudder (with tiller steering), they had a slab-sided brute that didn't go to weather well. In 1977 the company leased the 23,000-square-foot-shop of the defunct Grampian Boats ostensibly to build the Mega (but actually to provide an alternate plant should the Niagara-on-the-Lake facility go on strike, which it didn't), and also reserved a line at the new European plant for it. Less than 100 were ever built, and trailerability was probably the single criterion that led the concept awry. The demoralized design office held its own "what to do with a Mega contest" - one entry suggested sinking them to make breakwalls. Custom shop head Erich Bruckmann made the best of a bad thing by converting a Mega hull into a cruising powerboat. Mega Putt Putt is still tooling around at eight knots.