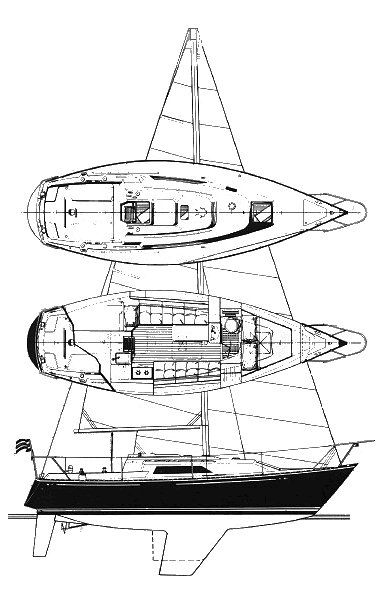 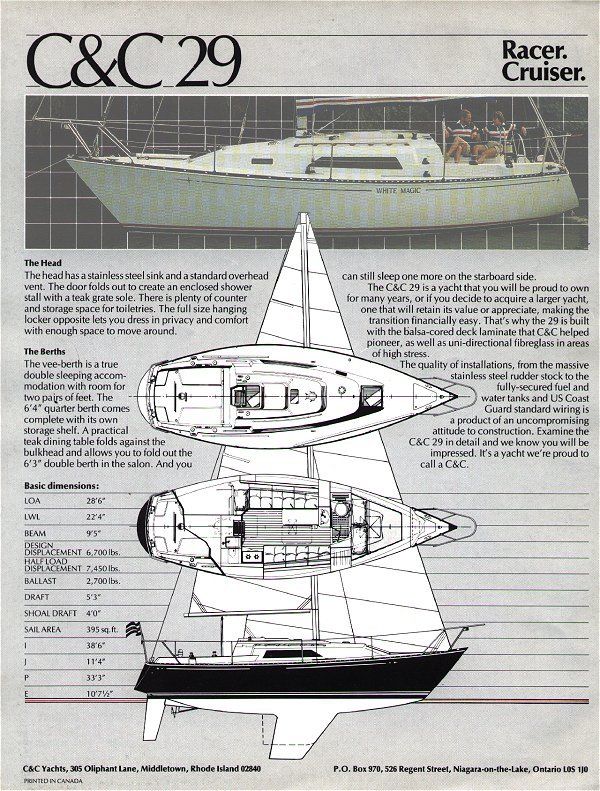 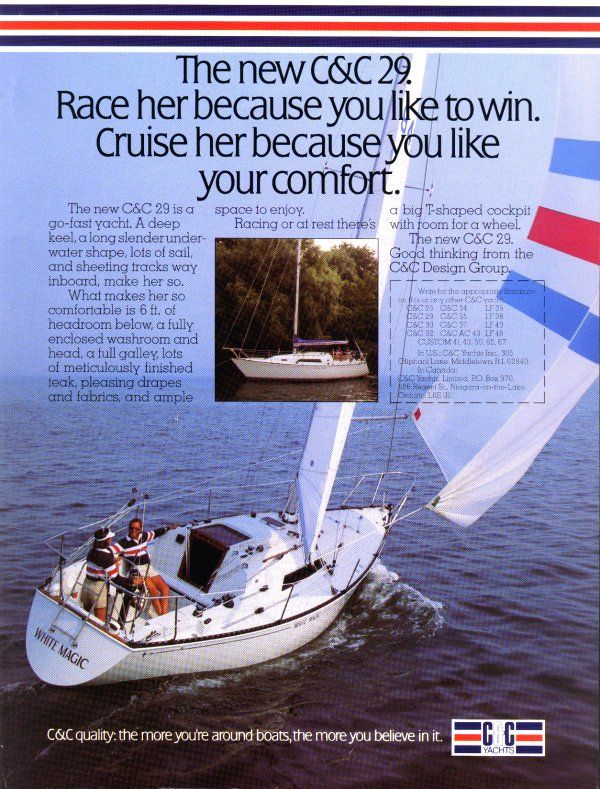 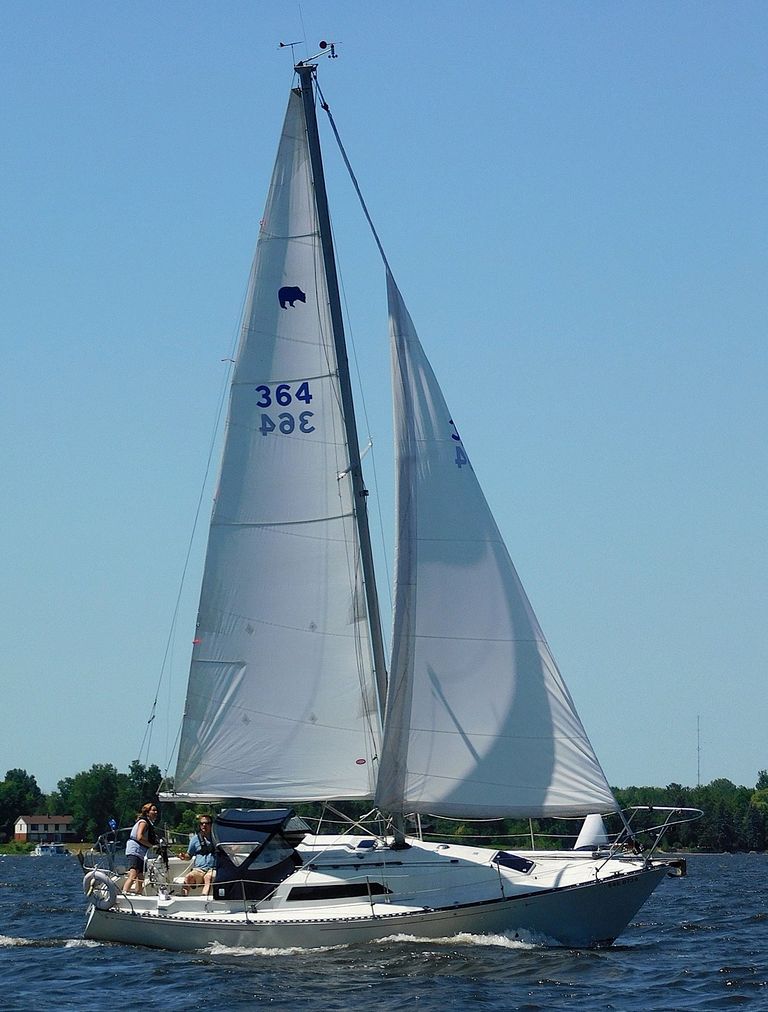 The New C&C 29, White Hawk, is George Doing's first sailboat. Following 16 years of boating in small powerboats, a Northern 29, and most recently in the competitive Toronto Etchells 22 fleet, he decided it was time to launch his own campaign in the Lake Ontario MORC fleet. George wanted a club racer he could sail with his two boys, aged 9 and 11, and still cruise with the family. Both he and his wife, Katheryne, wanted more luxury than they had experienced during early years camping together. Having rejected several used boats (on the basis that if you're going to buy a used boat, it should be a bargain and there are no bargains around), they settled on the successor to the C&C 27, the new 29, which went into production last November. White Hawk like C&C's prototype, White Magic, which was ready just in time for the end of the Toronto Frostbite series in October, 1982, sails against Viking 28s, CS 27s and White Magic measured in at 24.6 under the MORC rule, slightly more than C&C had predicted, but still less than the C&C 27 (about 25.8).

The C&C 29 holds the same attraction that swelled C&C 27 and 34 fleets: a simple interior and concentration on meeting the rule. It's also a pretty boat, its lines nicely proportioned. As George points out, "standard fittings aren't skimpy." The boat is well finished inside and out. Obviously C&C, and presumably C&C 29 racing owners, would eventually like to see enough boats on Lake Ontario to warrant a separate start. Based on the numbers, that goal should not be far off since November 1982, 170 boats have been sold.

We met George on one of those bright, clear days in early May that herald the start of another season. Spanking new, White Hawk's genoa crackled as it was taken out of the bag for the first time. All her sails are stowed forward, in the V berth, where they're easily accessible, although they'll probably be brought back to the main cabin when racing. George admits that the lack of sail stowage could be a problem while cruising, when he'll want all sails onboard. Two small stowage lockers under the V berth are cramped by the 16-gallon holding tank, and are inadequate for sails, though a deep anchor locker in the foredeck (standard on all C&C's production boats now) will be a natural hold for the number three.

Sail stowage is a problem on all boats, according to C&C Rob Mazza, project manager on the 29. He explains that emphasis is not placed on creating sail stowage because it is wasted if the owner has a limited sail inventory. Rather, C&C concentrates on packing in accommodation that, if necessary, can be turned over to sails. George says his solution may be to turn the cockpit locker into a sail locker, but that will still leave the problem of where to stow such things as fenders, sheets and mooring lines, bucket, mop, life jackets, and the electric cord which typically take up that space. C&C 29 HelmThe anchor well forward is a great improvement on the awkward, unattractive interior stowage space in the extreme forward end of early C&C designs. Inside, the well is closed off with a fixed teak panel, allowing the shelf running along the sides of the hull above the V berth to carry right around. There is only one hatch in the forepeak--a Lewmar forehatch--and no ports, but mounted on the side of the deckhouse it provides adequate light and ventilation forward. Opening ports over the hanging locker (this one might have been more effective in the head), in the cabintop over the dinette and existing from the quarterberth to the cockpit also add ventilation and light, and are worthwhile options.

The sense of space and light in the main cabin is partially due to George's carefully limited use of teak. Teak ceiling in the quarterberth are optional. C&C's singlewide windows on either side of the main cabin also allow uninterrupted light. Forward of the dinette, the enclosed head is a nice feature in a boat of this size. The door can enclose the head, leaving a canvas curtain to screen off the V berth, or it can close off the entire forward cabin and head. The enclosed head, a priority for cruisers and many racers, comes at the expense of a navigation station. (There's a limit to what you can put in 28 feet, six inches!) However, C&C has now arranged for the cockpit table (which mounts on the steering post) to double as a nav table when mounted on a bracket under the electric panel, between the foldout settee and quarterberth.

Skippers and tillers, which are standard and popular on the racing 29s, will have to figure out where to stow the table when it's not in use. Folding up the dinette table increases space for off-watch crew, sail bagging or just lounging. The inconvenient separate leg for the table and its leaf on early boats has been built in to more recent models. There is storage space under the full length of the dinette berth, accessible through four lockers under and in the side of the berth, a useful arrangement that could have made access to the small V berth lockers simpler, if it had been repeated forward. Space under the opposite settee berth is taken up by the 32©gallon water tank. The usual shelf lines each side of the main cabin. An ample galley includes a standard Princess two-burner alcohol stove, large icebox, a drawer with handy teak divider to keep things from rolling and lots of cupboard space. The optional pressure cold water system is a final farewell to camping-out. A clever feature in the galley is a chopping board that doubles as a stovetop or slides back and down out of the way behind the stove.

Back on deck, George is outfitted for racing with two jib halyards as well as a spinnaker halyard, uphaul and downhaul, all led aft. Though he still has some juggling ahead to finalize his deck layout, and may end up adding second winches to those now on either side of the companionway, one non-racing consideration in favour of lines led aft was easier singlehanding. Tackle for the split backstay and midstay (which allowed C&C to use the old C&C 26 extrusion), North head foil, boom vang, main luff bolt rope feeder, spinnaker winches and a sophisticated Nav 5 SR Mariner combination wind-knot-log-depth meter added to George's racing features. Deck space on the 29 foot is at a maximum with shrouds moved inboard (the chainplates enter the cabin above the settee berths), which also allows narrower sheeting. An optional inboard genoa track mounted on a notch in the aft end of the cabin trunk puts the track in line with the winches and narrows the sheeting angle by about 8 1/2 degrees.

Designed to the MORC rule, the 29 is deeper and relatively longer on the waterline with a finer entry than the flat bottom and tucked-in chine of IOR hulls. The benefit of the ' large keel area and thick section for low ballast, used in C&C designs such as Charisma and Silver Shadow, was proved by White Hawk's upwind performance in the light winds' during our sail. The helm was sensitive and well-balanced and the boat accelerated quickly. C&C 29 riggingLike many of C&C's production racer/cruisers, the 29 promises to be fun on the water, with a competitive edge for club racing, yet easily converted to comfortable family cruising. Originally published in Canadian Yachting's November 1983 issue.