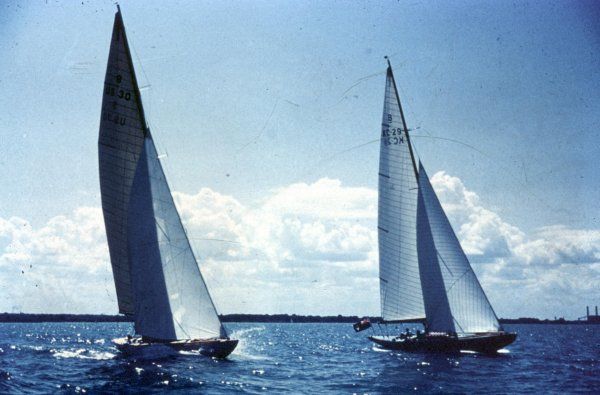 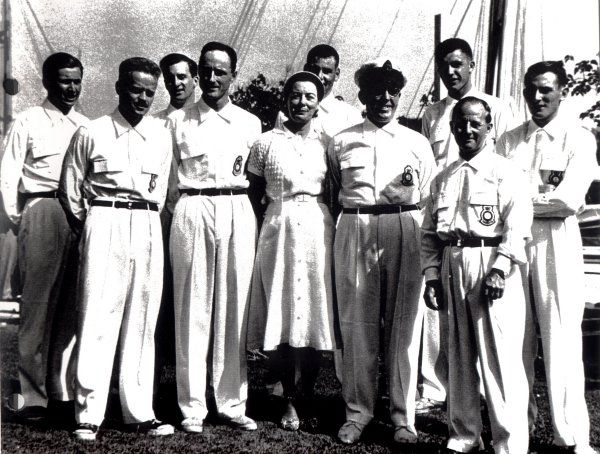 Dad, George H. Cuthbertson first caught sight of Norm Walsh as he and his yacht Evangeline sailed in to R.C.Y.C.     Evangeline was a little shorter than an 8 Meter but could give them a run for their money in light air.  Norm owned Eveready Cleaner, a dry cleaning company and enjoyed fast boats.  His interest in 8 Meters led him to buy Invader II.  Norm knowing George’s interest in yacht design asked Dad for any suggestions to make her faster.  The rigging was soon changed to increase her fore triangle and shorten the main, increasing her spinnaker pole length she could carry.  The following summer she was “virtually unbeatable” This led to G.H.C. to other re-rigging jobs.

In late 1952 with Norm’s eye on the Canada’s Cup, he asked Dad to find him the fastest 8 meter afloat and paid for his travels to Europe to find her.  Having not being able to acquire a suitable 8 meter for Mr. Walsh, this was the trip he did find Mir for Mr. Greb.  Upon returning to Toronto, Norm Walsh asked George what he should do. The answer was buy Venture. Mr. Walsh exclaimed “ Why did I send you all the way to Scotland and Sweden, she’s in Detroit “

A new mast and reconfigured rigging, she was stripped of all excess weight she had accumulated since she had been built in 1938.  All new sails made of the new material Dacron, first time being seen on the Great Lakes. And a new 40 foot wide nylon spinnaker was also added to her inventory.

In July 1954 she challenged Iskareen for the Canada’s Cup.  Venture lost the first race but with Dave Howard at the helm for the second race, the lead changed 5 times.  On the third windward leg, a tacking duel ensued.  During the next 26 tacks, one of Ventures spreaders came adrift, Peter Davidson on foredeck, scrambled up the mast to repair.  Iskareen tacked, Dave Howard looked up to Peter at the spreader, Peter nodded and with helm to lee, Venture tacked with Iskareen.  The spreader repaired, Peter back on deck the tacking duel complete, Venture finished 54 seconds ahead.

Venture went on to win the series and bring the Canada’s Cup back to R.C.Y.C. after almost 50 years.