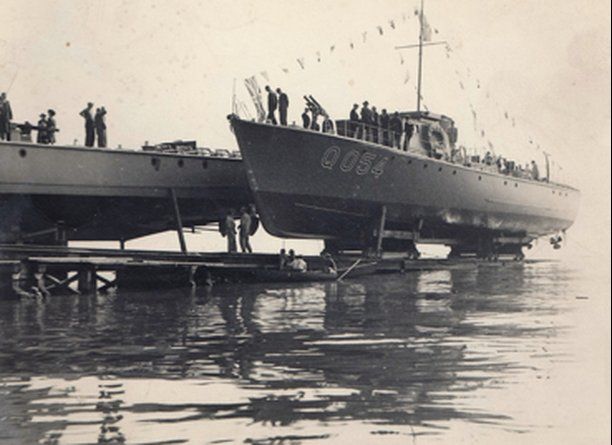 Sorry, sometimes I have to jump around when circumstances force your hand. And most of these stories I’ve told are such condensed versions, I hate to miss some of the details, but I have promised and tried to keep them short.  This one will probably be long and tedious but there is a part of the story that should be told.

Sachau Marine - The story from A Bridge of Ships: Canadian Shipbuilding during the Second World War

Thomas Greavette (1881-1958) grew up in Muskoka, where he began working at the Ditchburn agency beside W.J. Johnson’s boat livery near the locks in Port Carling as early as 1903. Following Ditchburn’s business failure, he incorporated Greavette Boats Limited in 1931 at Gravenhurst and after finding backers initiated production of “runabouts” the following year. To gain access to the Great Lakes, a requirement of the Department of Munitions and Supply, Greavette leased the site of Sachau Marine Construction Limited at Humber Bay, Mimico, and hired Hans Sachau as works superintendent.”

During the 1930s Sachau, a German-immigrant yacht builder who arrived in Canada in 1928, gained an enviable reputation for building quality yachts. His boatyard west of the Humber River, at 227 Lakeshore Road, possessed a 600-foot marine railway that allowed him to launch directly into Lake Ontario. During 1939 and 1940, while building one of the largest yachts ever launched on the lake, he added a “Y” branch to the railway, which allowed him to build two boats at once, both under cover. Sachau’s friendship with Thomas Greavette, and perhaps the government’s reluctance to deal with a German immigrant, led to Greavettes arrangement. The contrast between the Dominion government's treatment of Hans Sachau and James Franceschini could not have been greater. Three boats (054, 055 and 056) were commissioned at Humber Bay in the fall of 1941, two more (077 and 078) on 2 June 1942, and two more (089 and 090) in the fall of 1942. The final (091 and 114) were commissioned in May and November 1943. Greavette’s Gravenhurst plant remained busy during the war, Some parts of the motor launches, probably superstructures, were built there and shipped to Toronto for final assembly.

Another well-known Humber Bay boat builder was Hans Sachau who emigrated from Germany in 1928 with his wife Anna. In 1931 Hans founded Sachau Marine Construction on the south side of Lake Shore Bl. W., east of Park Lawn Rd. (then called Salisbury Av.) He built cruisers and sailboats.  During WW II, Hans was contracted to build Fairmile motor launches for the Royal Canadian Navy.  He also made fins for Mosquito Bombers and designed rehabilitation equipment for war veterans. Anna started a restaurant and inn on their property called The Dutch Sisters, named for their three daughters.  The property was sold in the 1960s and the new owner rebuilt the inn in a Spanish style, renaming it Casa Mendoza.  This business was demolished in 2012 and replaced by a condo.

Not sure how much of the original boat building plant survived to the end but those that use to know the Lakeshore Motel Strip in Etobicoke just on the western boarder of Toronto, well that use to be a hot bed of boat building in the 30’s to the  50’s.

After WWII ended Sachaus went back to building pleasure craft and just being to the west of where George H. Cuthbertson was living, he would bike over and stare at the boats being built.