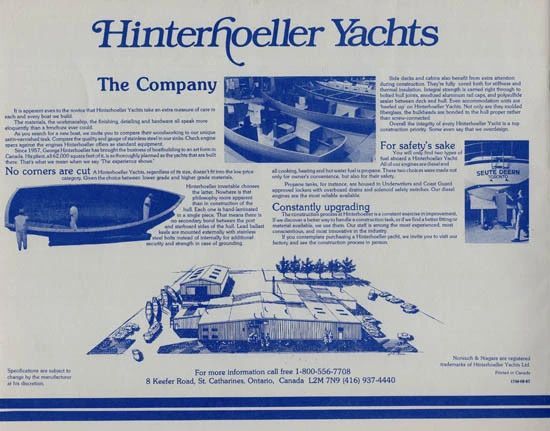 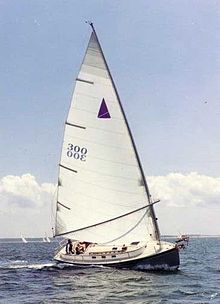 Reception at C&C during the heyday must have had a tough time cause if someone called in and asked if they could speak with George….. there would have been a pause… which one ? There was a third George instrumental in the founding of C&C Yachts. George Hinterhoeller was born in Austria in 1928, apprenticed as a shipwright and then moved to Canada in 1952, he shortly found work at Shepherd Boats in Niagara on the Lake, Ontario. Being an entrepreneur spirit, he left after 5 years and stated his own boat building company. Now he says his first yacht sank, well he did build that one when he was 4, by 1959, he had perfected his own designs and started construction on the first Shark. It was a success for him and his partner Gordon Brinsmead and eventually over 2000 Sharks were built. Hinterhoeller also designed and built the HR 25 and 28.

In 1963, GAH contacted Cuthbertson and Cassian Limited to design the Invader class. The first being built of cold molded mahogany and owned by David Howard and John Hilton, who named her Invader. This was used as a plug to build the first fiberglass boat of C&C design. Sadly that summer she was wrecked, as the lights of the Toronto Island Airport at the Toronto Harbour western gap were “misinterpreted” by Mr. Hilton. The remains of her can now be found as the bar at the NOTL Sailing Club. The first fiberglass hull was then commissioned as Invader II ( not to be confused with any of the 8 meters ) and hull #2 RIP II was bought by Al. Mason who would later marry Bernice Telford, widow of Dick Telford, who had given GHC his first….. oh there I go again )

At Shepherd, Hinterhoeller had learnt about production line boats, taking this knowledge he set pits up in his every increasing in size plant. The boats would be lowered in to the pits so the decks were at floor level. This allowed the craftsmen to not have to climb up and down ladders to work on the boats, saving time and potential injuries. By 1969 he had 5 lines running including the Redwing 30 and a staff of 57 producing 181 boats a year.

That year Bob Sale, suggested that George Hinterhoeller and 3 other companies join forces to form C&C Yachts. Each division would keep their autonomy but by combining design, management, marketing and supply chains they would because a force to recon with.

1972, C&C Yachts experienced growing pains at the top as Ian Morch left as President succeeded by George Hinterhoeller. GAH was a boat builder and freely admitted he was not a president of a corporation so after 10 months missing the shop floor he stepped down.

By late 1975 George Hinterhoeller had enough of the being part of C&C Yachts and left the company. He forms Hinterhoeller Yachts in 1977 with his son and begins building the Mark Ellis designed Nonsuch line. A series of cat boats that reached a production # of 975.

George opted for retirement in 1988, noting that the boat business was saturated with used boats. The boat building business didn’t do well in the late 80’s. By 1989 the company had entered receivership and was completely gone by November 1995

George Anton Hinterhoeller passed away in March 1999 from a stroke left behind Nona his wife of many years.

If you'd like to read other articles I've posted on the history of GHC, C&C yachts and a few reproduction of promotional items, go to www.candcyachts.com